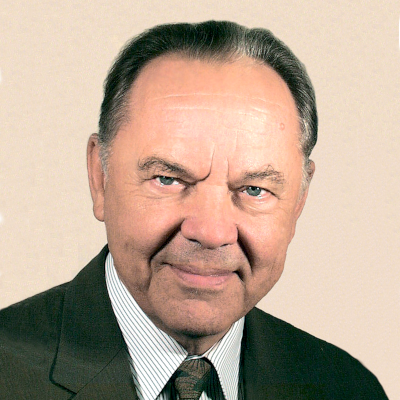 Head of the Department of Immunology,
M. M. Shemyakin and Yu. A. Ovchinnikov Institute of Bioorganic Chemistry (Moscow, Russia)

fundamental and applied problems of non-infectious immunology and immunogenetics

Prize named after I. I. Mechnikov of the Academy of Sciences of the USSR - for the monograph "Immunology and immunogenetics" (1978)

Diploma named after N.F. Gamaleya of the USSR Academy of Medical Sciences - for the monograph "Immunology and immunogenetics" (1978)

Gold Medal of the Italian Society of Transplantology (1978)

A. A. Bogomolets Prize of the USSR Academy of Medical Sciences (1979)

Certificate and diploma of the USSR State Committee for Inventions and Discoveries for opening No. 192 "The phenomenon of interaction of lymphocytes with hematopoietic stem cells" (1980)

Order of the October Revolution (1981)

Hero of Socialist Labor (Decree of the Presidium of the Supreme Soviet of the USSR of May 8, 1991, the Order of Lenin and the Hammer and Sickle medal) - for his outstanding contribution to the development of domestic biological science and the introduction of the results of fundamental research into public health

Honoris causa doctorate from the Polytechnic University of Madrid (1995)

Prize of the Government of the Russian Federation in the field of science and technology - for the development, introduction into industrial production and clinical practice of a new type of immunocorrecting peptide drugs: T-activin and myelopid (1997)

M.P. Chumakov Prize of the Russian Medical and Technical Academy - for a series of works on immunobiotechnology (1997)

Order of Merit for the Fatherland, III degree (June 4, 1999) - for a great contribution to the development of national science, training highly qualified personnel and in connection with the 275th anniversary of the Russian Academy of Sciences [2]

Gold Medal of the International Society of Transplantology

State Prize of the Russian Federation in 2011 in the field of science and technology (2012) (together with R. M. Khaitov)

It is easy to register as an author but it is not easy to be an author. By submitting a manuscript, you agree to adhere to our publication guidelines and take full responsibility for violating them.

Please read our Editorial Policies before you register! Thank you.

Check your e-mail and confirm your registration, please